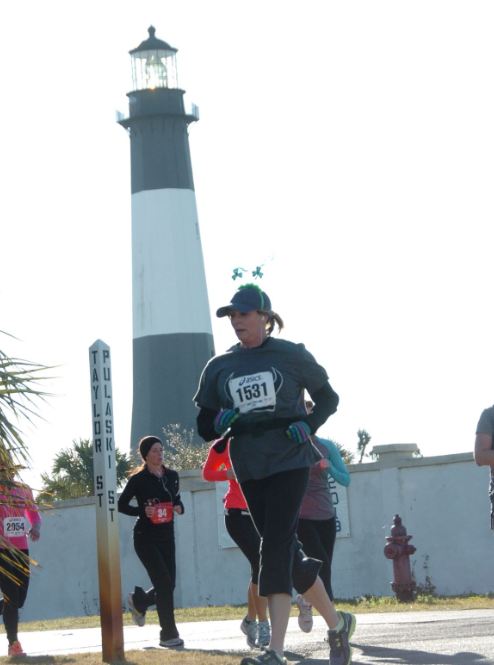 Every year I give myself a fitness goal. This year the goal was to run a half marathon. Full disclosure, I really don’t like running that much. Previously, I had told myself that I felt no need to run anything farther than a 10K, but the concept of the girls’ weekend trip incorporating a half marathon appealed to me. So I signed up with Terri and Kathy to run a nighttime 5K and the next morning a half marathon on Tybee Island. Terri, who is fighting her second bout of ovarian cancer, has been treating this time for over a year, so she was very inspirational in my decision to run the half. As the marathon approached, we agreed that we would not compete with one another. We each had a personal goal we hoped to achieve.

We arrived in Tybee Island to some chilly beach weather. The Friday night 5K was cold and we dressed accordingly. Being the first night run for all of us, we weren’t sure if it would help or hurt us for the morning race. The run went well for us; Kathy and I finished seconds apart with Terri not too far behind, having run the entire 5K without stopping, a first for her.

Saturday morning arrived! There was a sense of excitement at the starting line waiting for the countdown to the race. I was surprisingly not nervous, having convinced myself that I could walk if necessary. We begin. For the first two miles I stayed with Terri, while Kathy pulled ahead. The first two miles seemed long and I was having second thoughts. During the next four miles I caught my breath and was able to start enjoying the scenery. We ran through the streets of Tybee Island to the lighthouse, and out to the swampy areas, as well as through many neighborhoods and downtown. There were people out on the streets to watch and cheer us on. I was still doing fine at mile eight, as the runners who would ultimately be the winners, looped past us on their final mile. By mile 10, I determined that the remaining 5K was going to be tough. I began to count my aches and pains – my calf, my ankle, and my legs, but I was determined to keep running. I began keeping pace with another runner and we ran together, stopping for water and encouraging each other to finish. We finished together in 2:23 minutes, beating my personal goal. Predictably, Kathy had finished before me and Terri came in slightly behind. My first thought was how glad I was that I was not running an additional 13.1 miles to complete a marathon. My next thought was how I would do it again next year.

Doreen just celebrated her 12th anniversary at The Cooper Firm. She is a wonderful member of our team, and a joy to work with. We are very happy to have her here.