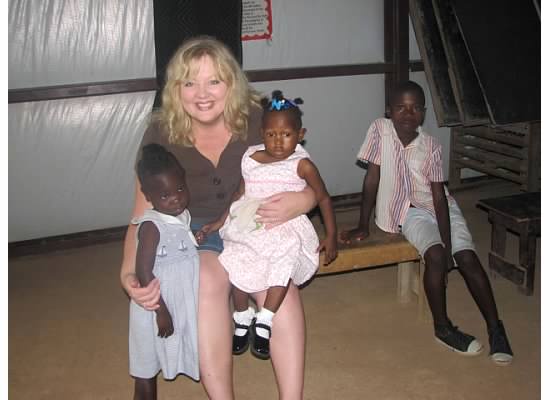 This June, I took my second trip to Liberia, Africa. If you know me, you know this is quite an accomplishment from the girl who always said… “I will help you go but I am staying HERE!”

In June 2008, my good friend, Daryl Roberts, traveled to the bush of Liberia on a mission trip. He came home a changed man. The children he met were in desperate need! They needed medical care, housing and food. He believed that the lives of the children at the orphanage had been placed in his hands by God. Upon returning home, he formed Orphan Aid Liberia. He immediately began collecting and boxing up clothes, school supplies, food, medicine, and other items the children needed.

I was there in Daryl and his wife Chrissy’s basement for the packing of the first boxes that were to be shipped. We all thought Daryl had lost his mind, but my family was happy to help in any way we could. The pictures from his trip showed us the extent of the need, as the mission team took time to record each child’s story. The stories were heartbreaking and involved a country torn apart by a terrible war. Many children saw their parents murdered as they fled. Daryl’s calling was not a passing reaction to what he saw, and he brought my family with him into that calling.

In 2011, Orphan Aid Liberia formed its first mission team to go visit the children. Daryl and Orphan Aid Liberia sent construction teams over previously to erect a new steel building for a school and two new dorms, one for the boys and one for the girls. This team would be doing some construction, as well as making assessments for additional needs. I prayed and believed that my husband, Tonny, was supposed to be a part of this team. We made a deposit on the trip. As time drew closer, it was apparent that he would not be able to go. His job would not allow it. I was devastated. We drove some of the team members to the airport and helped them carry their luggage. As the team left, I was heartbroken. Each day I anxiously waited to hear an update or see a new picture. When they came home I devoured every story, every detail that I could get.

It became clear that it was ME that was being called to go to Africa…not Tonny. I tried; oh I TRIED to make it be Tonny that was supposed to go…because I CAN’T GO TO AFRICA!!!

So the trip for 2012 began to form, and I knew I was definitely going to be a part of the team!! I felt strongly convicted that I was supposed to go. You may have read my co-worker, Linda Stricker Campbell’s story in our February newsletter. I came to work and told her I was going to Africa and lo and behold she said, “I’ll go with you!”

Two years in a row we have been roommates on a wonderful adventure! We have done vision clinics, Vacation Bible School, prepared meals, and LOVED on some beautiful children! It is amazing to see all that Orphan Aid Liberia has accomplished in a short time. Daryl’s vision is to reach more than just the orphans where we presently work. He wants to reach as many orphaned children as possible in Liberia. Our current project is the de-worming of thousands of children in Liberian orphanages. Lance Cooper and his son, Asa, were able to help with this project when they climbed Mt. Kilimanjaro with Daryl Roberts to help rebuild these childrens’ lives from the ground up. For more information please visit our Facebook page at Facebook.com/orphanaidliberia or our web page www.orphanaidliberia.com.