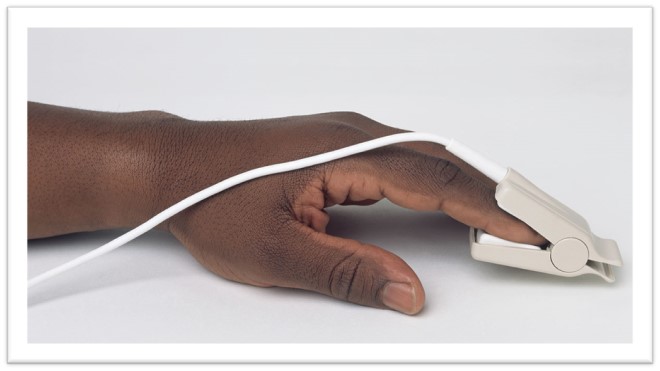 “Life changes in the instant.  The ordinary instant.” People experience these instances in their own ordinary way. Sometimes they die because of them. To their families, the death alone is significant enough to shake their lives and alter their futures. Sadly, when the tragedy involves a defective product, corporate reaction (if any) often does not happen until there is a “statistically significant” correlation between the defect and the harm.

Put another (harsher) way, some manufacturers are not going to spend the money to identify and/or repair defects until enough people have died from the product. This is as true for cars as for medical devices, the latter being somewhat more prone to transparency and objective scientific study.

This is a story about science, however delayed, eventually getting it right.

In 2007, The Cooper Firm filed a products liability lawsuit. Our client was of African descent. He died after developing a pleural effusion following “routine” surgery.  His doctors used a finger pulse oximetry device to monitor his arterial blood oxygen. Such devices rely on light waves and their measurement. In any event, our client’s doctors, believing the pulse oximetry data, did not perform a more quantitative arterial blood gas test on him or start him on oxygen therapy — until far too late. Right up until about the time he died, those pulse ox devices falsely reported that our client had adequate blood oxygen.  The doctors had an inkling that something was not right, but the pulse ox devices misled them to believing that our client not as close to death as he really was.  The delayed recognition of his low blood oxygen led to a delay in the appropriate medical treatment. 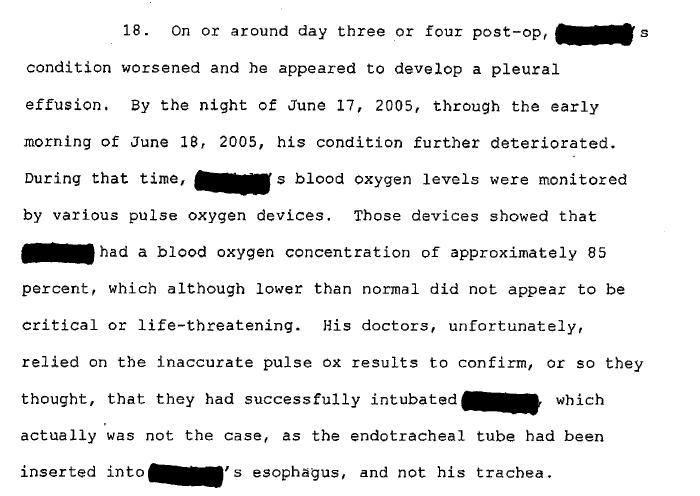 As we further alleged about our client’s preventable death: 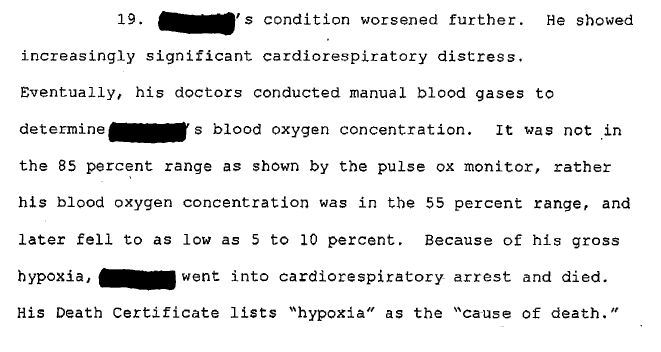 About the pulse ox device itself, we specifically alleged, among other things, that:

The case settled because (at that time) the science had not caught up with reality. There was not enough light shone on the problem. There had been some anecdotal reports about skin and pulse oximetry, but no supporting articles in the reputable Lancet, the New England Journal of Medicine, or the Journal of the American Medical Association (“JAMA”). Pulse ox manufacturers belittled emerging reports in lesser-known medical journals. Had we known then, however, what we know now, we would have tried the case to a verdict. It took the coronavirus pandemic of 2020 and 2021 and many more deaths to generate the research and reports that would have supported our case in 2007.

On May 31, 2022, the JAMA Internal Medicine journal reported the results of an extensive original investigation into the issue of whether skin color played any role in false pulse ox readings. The investigation began because data showed that COVID-19 seemed to cause more deaths among non-White patients. The dark-skinned patients often received delayed triage decisions and life-saving treatments because their pulse ox readings were inaccurately high.

The study, which focused on over 7000 patients, concluded:

Put simply, pulse ox devices can overestimate the amount of blood oxygen in Black and Hispanic patients. Just a few percentage points in blood oxygen levels can mean the difference between life and death. Because of the device flaws, the treating doctor is led falsely to think that the patient is doing much better than she is. Conversely, the critical condition of their Black and Hispanic patients is concealed from them until it is too late to remedy it.  Helpfully, the JAMA study cited to several more recent 2020 studies and warnings about racial bias in pulse oximetry. Id. (footnotes 5, 35).  Others from 2021 now exist as well.

The JAMA study noted that more than mere “awareness” of the pulse ox problem is needed to mitigate adverse effects in Black and Hispanic patients. The study addressed manufacturing issues as well, noting that “innovative approaches, such as the integration of additional wavelengths or calibration based on skin pigmentation, are needed.” Id. at E7. Those scientific suggestions may one day be the basis of a feasible alternative design, which many states require in products liability lawsuits.

These studies come too late to help our client. If you have a Black or Hispanic client who died or was injured because of delayed treatment or a falsely elevated pulse ox reading, however, these studies and articles should be among the first you review and incorporate into your Complaint and legal documents. As Clergyman Theodore Parker once said, and as Martin Luther King, Jr. used to quote and emphasize: “[T]he arc of the moral universe is long, but it bends toward justice.” The same is true of the scientific universe, so long as the people in it are properly motivated to see the breadth of a scientific problem and study it.

Lawsuits and our efforts to obtain justice for our injured clients can provide that motivation and shine light on problems that many manufacturers would prefer to remain hidden in the dark.